The Shin Megami Tensei franchise has a huge number of choices for players to get involved with. This guide will help you avoid the most common conflicts and focus on what is important in your playthroughs.

The “Shin Megami Tensei V True Ending Guide” is a guide that will help you through the game’s story. 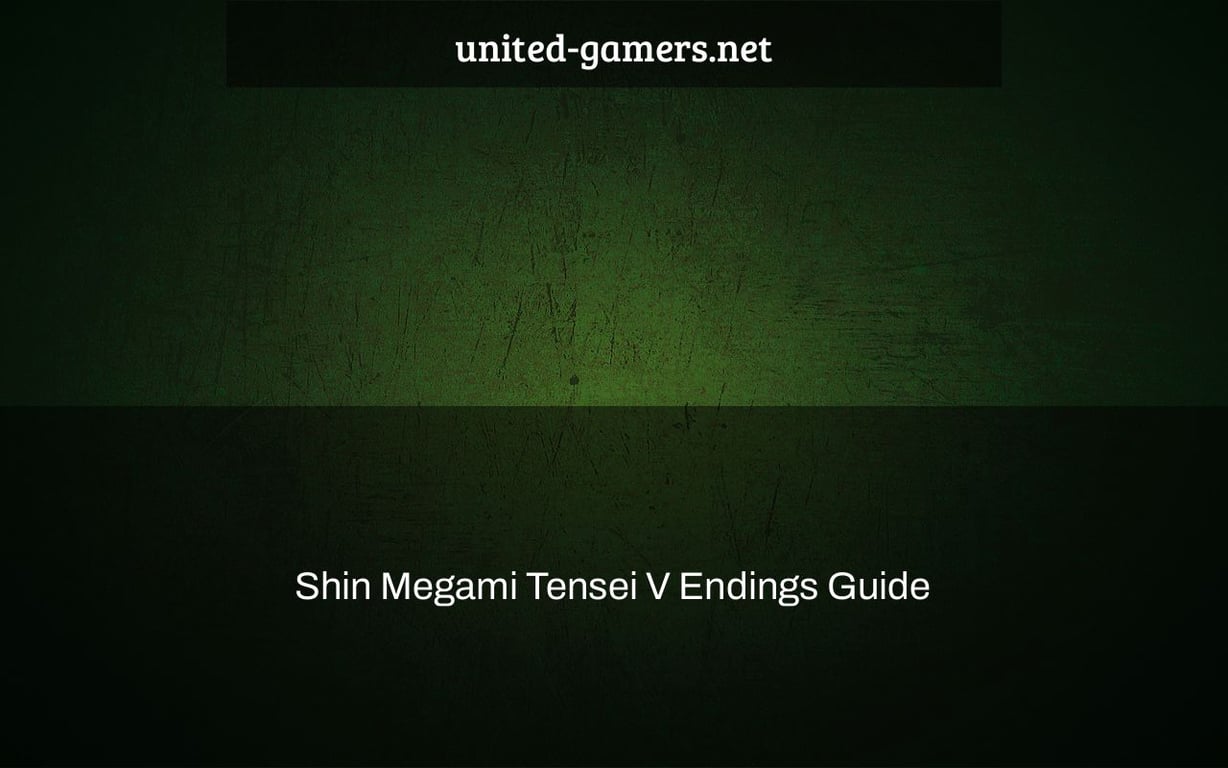 The Shin Megami Tensei’s morality system has always been built on the ideals of “Order” and “Chaos,” rather than a simple choice between “good” and “bad.” These opposing viewpoints both have advantages and disadvantages, impacting mankind in unique ways. The decision will eventually lie on the shoulders of a single high school student, as is typical in these games. The endings of Shin Megami Tensei V are detailed in this guide. Please be advised that there will be spoilers ahead.

Unlike earlier Shin Megami Tensei games, Shin Megami Tensei V’s ending is decided by a single super-important decision made at the story’s climax, rather than by the action and speech choices you make throughout the game. It’s a bit less spectacular, but it’s superior in terms of quality of life. Your general alignment, on the other hand, will play a tiny role, as I’ll explain later.

After defeating Metatron in the Temple of Eternity, you’ll be faced with a crucial decision: who should ascend to the Empyrean Throne and take control of reality as we know it? You may choose between four possible endings, each linked with one of the game’s factions, and the decision you make will lead you along that road.

You’ll partner up with Dazai and Abdiel to seize the Throne in the name of God and the angels if you choose “I shall maintain God’s order.” Humanity will be protected from demons, but only if they pledge their total and unwavering devotion to Heaven.

If you do Order-oriented activities throughout the game, you’ll get access to the unique Miracle Rank Violation, which allows you to combine demons of higher levels. Maria’s “Compassionate Queen” and Melchizedek’s “The Seraph’s Return” are two route-exclusive sidequests. Because the questgivers don’t trust you if your acts are Chaos-oriented, you’ll have to pay huge Macca fees to accomplish these sidequests. This way will also give you early access to Abdiel for fusion, however you can get her by finishing the game on any route.

You’ll link up with Koshimizu and Atsuta to restore sovereignty to the planet’s numerous deities if you choose “I shall remake the universe and preserve Tokyo.” People will be free to worship and follow anyone they wish, but this will inevitably lead to strife and bloodshed in the future.

If you do Chaos-oriented acts throughout the game, you’ll have access to the Miracle Inheritance Violation, which allows you to override a demon’s original talents while forming a fusion. Maria’s “The Wrathful Queen” and Belial’s “The Red Dragon’s Invitation” are route-exclusive sidequests for this path. The same alignment rule applies here; if you’re Order-aligned, you’ll have to pay to complete the sidequests. If you choose this path, Hayataro, the lion-like demon that teamed up with Atsuta early in the tale, will be available for fusion.

You may prevent any demon or angel from attaining power alongside Nuwa and Yakumo by choosing “I shall demolish the Throne.” There will be no organized demonic or heavenly assault army, but mankind will be without spiritual leadership in dealing with the remaining demons.

There are no unique unlocks for this path, and Maria’s “The Noble Queen” is the sole exclusive sidequest. This is due to the fact that you aren’t receiving the entire picture.

You’ll have to put in a lot of effort if you want this outcome. You may not want to attempt until you’re on a New Game Plus, but hey, I’m not here to tell you how to live your life.

To begin, there are numerous questlines to accomplish, totaling eight sidequests in all. These are the questlines and quests:

Observations on these quests: To begin with, the first mission in Khonsu’s line, “The Egyptians’ Fate,” pits you against him in combat, after which you must choose whether to murder or spare him. You must spare Khonsu in order for the following missions to emerge. You’re officially out of luck if you fire him.

Second, “A Universe in Peril,” Shiva’s mission, is the game’s superboss quest. Shiva is level 96 and has a long list of top-tier abilities. You aren’t even permitted to take a punch at him until you’ve reached level 80. Just keep in mind that if you want to earn the True Neutral ending, you’ll have to face what may be the game’s most difficult fight.

Proceed to the Temple of Eternity and fight Metatron if you’ve finished all of these questlines. When you’re given the option, choose “I shall destroy the Throne” and continue as usual. Following the defeat of Abdiel, Nuwa will appear and provide you with a fourth option: building a planet for humans alone. If you choose this option, you will utilize the Empyrean’s power to wipe all angels and devils off the face of reality, allowing humans to live their lives free of foreign interference. Of course, whether mankind can survive without a belief system remains to be seen.

You won’t get anything unique if you go this path, but I’m sure all the grinding you did to battle Shiva will make up for it.

How many endings will SMT 5 have?

A: We cant say yet. Its not even out in Japan, so we dont know!

How many endings does Shin Megami Tensei have?

A: There are multiple endings in this game.

Best Keybinds for Escape from Tarkov